Do your students experience the messiness of doing mathematics, searching for patterns, trying and failing in explaining an idea before they come to a complete argument?

The continuum of independent thinking

Most of my students (non majors and math majors) are happy to believe anything I state about mathematics. After all, if a professor claims that something “works” then it has to “work”, right? Even if it doesn’t make sense. I find this unfortunate, because I want to move my students towards owning an argument, to become more independent in their decision and belief processes. Why? In and outside the field of mathematics, students will need to be able to think for themselves and decide the truth or completeness of arguments, so doing this should become a habit of mind. As Paul Lockhart states in his lament: Mathematics is the art of explanation.

So, the next step on a students’ path towards mathematical independence is often this: “I get it now, it works for this example so it will always work!” While it is not clear that the student actually “gets it” and can make sense of everything, this is a very important step in understanding the larger picture.

Mathematics - this may surprise or shock some - is never deductive in its creation. The mathematician at work makes vague guesses, visualizes broad generalizations, and jumps to unwarranted conclusions. He arranges and rearranges his ideas, and he becomes convinced of their truth long before he can write down a logical proof...

In the language of mathematics education, the kind of reasoning that uses patterns and examples has a name: inductive reasoning. (Not to be confused with mathematical induction which is a proof technique that deals with natural numbers in very specific cases. An unfortunate translation several hundred years ago seems to have led to very confusing similar terms here. See Florian Cajori's paper "Origin of the Name Mathematical Induction" Link to paper at Jstor.) G. Polya introduces the idea of inductive reasoning and gives many examples across different levels of mathematics in his wonderful book Induction and Analysis in Mathematics.

I would like you to watch minutes 1:20 to 3:10 in the following video clip. How independent is this group of students in their thinking? How do you know?

The power of inductive reasoning

When the DAoM team wrote a paper about proof in our math for liberal arts courses we realized that different mathematical communities approach communicating about reasoning differently. In K-12 education the terms inductive and deductive reasoning are frequently used to describe the process of how mathematicians do mathematics, see for example the paper From Inductive Reasoning to Proof by David Yopp. Yet in many math major courses this process can be quite hidden. In my own experience as a student, finding and presenting the most elegant (shortest? coolest? simplest?) proof seemed to be more important than to share the process of messiness -- when one tries and fails, or finds the longest and weirdest proof, or how we end up with more questions than we started out with. Being presented only with the “polished outcomes of mathematics” led to unrealistic expectations and quite a bit of frustration on my end.

So let’s create spaces in which students can be messy when they do mathematics. And if students create their own inductive arguments they often naturally find a deductive argument as well. So how do I know that it is really their argument and that I did not push them in my direction of thinking? Well, many of their arguments I have never seen before and sometime struggle to make sense of, so clearly I could not have planted these ideas!

Read our 3a+5b Blog for a collection of proofs that different groups of students developed for the 3a+5b problem. Notice how different they are! Recently our students generalized the conjecture to any whole number coefficients xa+yb and we noticed that some of the original student proof ideas could be generalized while others could not. So having many ideas around was not only interesting but actually necessary to go further.

My most powerful tool for helping students along the continuum of independent thinking is to just keep asking my students why things are true until they are so used to it that they do it without me being there. It has become a habit of mind. 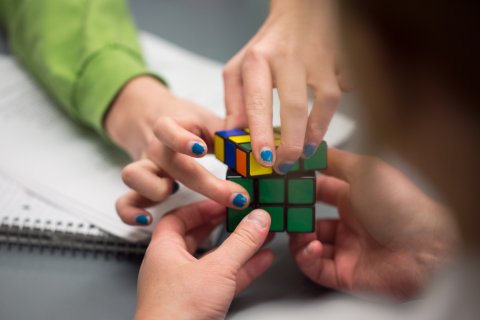