What does inquiry-based learning mean to us? How do we teach? Let's walk into Volker Ecke's classroom and listen to his thoughts: 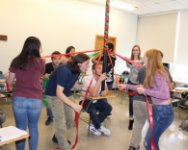 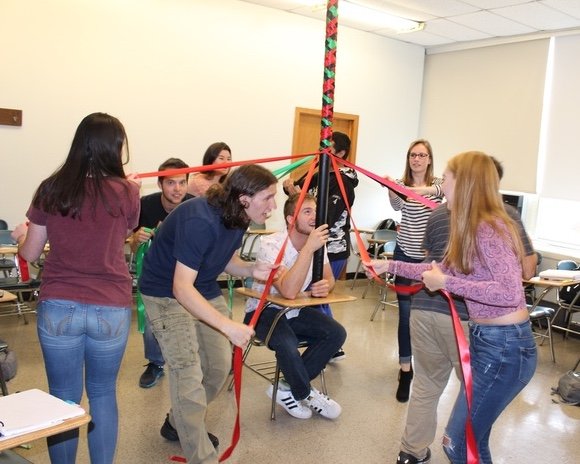 I have just started class by introducing the students' task in just a minute or two: Create a poster summarizing your group's thinking about a series of investigations from the previous class and to be ready to present your reasoning to the whole class.

The larger question for this unit is to predict the ribbon patterns you will get on a Maypole when people dance a standard Maypole dance around it. This particular sequence of tasks introduces the "Maypole" chapter of "Discovering the Art of Mathematics - Dance".

I need to provide students with a sequence of inquiry-based learning tasks that allow them to take charge of the problem-solving activity, and to take ownership of their learning. The amount of structure will depend on your students' prior knowledge, familiarity with inquiry-based classrooms, and your own preferences. My colleagues and I are constantly searching for tasks that are accessible, interesting, puzzling, embedded in context, provide structure and support, yet leave most of the mathematical thinking to the students. In our classrooms, students will often have to come up with their own definitions, report their own observations, formulate their own conjectures, and develop and present their own proofs.

Having students collaborate in groups creates an atmosphere where many students are involved in mathematical conversations and sense-making for significant periods of class time. Three to five students are seated around group tables, which naturally support group conversation and collaboration. Our tasks are challenging in order to make group collaboration valuable (or even essential). The room holds a total of nine such tables. Our "Mathematical Explorations" classes for liberal arts students typically hold 25-30 students.

In the center of this particular table, you can see a student's notebook with her drawings from a previous class. In the back on the right we see a blank piece of poster paper and some color pencils. You may also notice their Rubik's Cubes, the second topic of this class.

Notice the folded index cards in front of each student: these are name-tags created by the students at the start of the semester. They help everybody in the class get to know everybody else by name. I hold onto these between classes and place them at the beginning of class to indicate where I'd like each student to sit. Often, I mix up the groups from class to class; if there is a longer project, I sometimes assign the same groups for a few meetings. This regrouping helps to quickly create a sense of community and safety, since students build trust in working more closely with most of their peers within just a short while. In addition, it allows me to separate or join students who may dominate a group, try to "hide", to group them by level or by mixed abilities, or rearrange them as the dynamics of the work in the class requires. Sometimes mixing it up is valuable in spreading good ideas across the class; sometimes maintaining the groups is valuable to highlight divergent ideas in a whole class discussion. My decisions are often guided by the wish to allow everybody to work productively at their edge of learning.

In the background you can also see a sidewall filled with two large blackboards. Our department's classrooms are equipped with wall-to-wall blackboards. This allows us to send all student groups to the blackboards to document their thinking for gallery-walks, whole class discussions, or group conferences in a way similar to posters. In this way, everybody in the classroom can learn how the other groups are making sense of the problem.

This video shows you this classroom setting in action. The students are working on the Rubik's Cube (not on a Maypole activity). You may also appreciate a glimpse of my interactions with students as they struggle with making sense of the Rubik's Cube.

My role as I go around:

I think of myself as a coach. My role is to encourage the students in their inquiry, to learn about their reasoning, not to tell them a quick procedure to get to an answer. We find it helpful to respond to students' questions with questions of our own, in a way that returns the attention to the students' reasoning, representing, and sense-making. You can read more about asking "good questions" in this blog post.

Visiting each table allows me to listen in, to assess the group dynamics and intervene if needed, to assess the group's progress and depth of reasoning, to help them if they are stuck, to point them to resources, to monitor how their work might fit into a whole class discussion, and to plan where to take the class next (there might be an intriguing question or a surprising connection, or an unexpected stumbling block, or a number of other possibilities). Such a visit can also involve taking no visible action beyond just listening.

We are now joining the class in progress. A group of four students is seated around a large group table. I have just introduced the following task: each group has been asked to prepare a poster that captures details about the following question.

Big Investigation: What can you say about the angle of the ribbons on a pole when you want to create a pattern with no gaps or overlaps?

As the students get to work, I walk around, stop at a table, and sit down to listen to the conversation between the students:

Student A: So we have to show that it won't be the same angle. It will be different but the same ...

Student D: So should we start off with just one ribbon? Let's pick one. This was our example of showing our thinking with one ribbon. [[Points to a drawing in her notebook. Other students lean over to get a look.]] It follows this ribbon around. (see student poster about maypole dancing)

Student A: [[Grabs a maypole that the students have used before and sets it up with one ribbon.]] So if this is a smaller ribbon. [[Attaches a ribbon with a rubber band with ease.]] And we want to wrap it around with no gaps or overlaps, so it has to be more horizontal. [[As she talks, she shows three loops with the ribbon, with no gaps or overlaps.]]

Now, if the ribbon is thicker [[grabs a wider ribbon]] it's less horizontal because it's thicker [[shows two loops around of the ribbon with no gaps or overlaps]]. So I think we should show two examples.

Student D: One example like this when it's thick and one when it's thin. And also when we have two ribbons. (see lower image on student poster about maypole dancing)

Student C: Because they'll get the idea.

Student D: Should we divide the poster in four, and put these four pictures here, here, and here [[points]]?

Student C: Split it this way and that way [into quarters].

I notice that student Student B has listened attentively to what the other group members were saying, but has not contributed during this brief snapshot. I make a note to check in with her later on. Seeing that the group is well on their way, I move on to the next group.

Classroom Vignette: What do we see?

In considering what to put on their poster, the students are communicating about their ideas and clarifying their own thinking; they are using drawings that were helpful to them in making sense of the mathematics; they make use of a physical maypole model as ultimate evidence for why the drawings capture the key aspects; they make strategic choices about what evidence to present to the whole class in explaining their reasoning. The students are learning mathematics by actively investigating mathematical questions, rather than just listening to a teacher's explanations.

We witness a community of learning in progress. This vignette highlights the fundamental role of social interaction in the development of cognition and in "making meaning". (Vygotsky, L. (1978). Interaction between Learning and Development (pp. 79-91). In Mind in Society. (Trans. M. Cole). Cambridge, MA: Harvard University Press.)

Many of the skills we witness are higher-level skills: we see critical thinking, taking responsibility, defending your opinion, questioning others, and using tools strategically. We feel that these skills are crucial in allowing our students to develop into successful, creative individuals and actively involved citizens.

My own visible actions in this vignette were limited to stopping by, listening in, and moving on. While it may seem that no teaching is happening, we see clear evidence of student learning. My role is essential in designing or choosing inquiry-based learning tasks that allow the students to take charge of making sense of the mathematics; my role is also key in creating a classroom atmosphere where a community of learners becomes the authority, rather than investing the teacher with that power. My role also includes facilitating whole class discussions based on carefully selected presentations of student ideas.

Research into the effectiveness of inquiry-based learning (IBL) initiatives in post-secondary mathematics has identified the following characteristics as common among such settings (Laursen, et al, 2011):

Perhaps our short classroom visit made some of these key features visible.

If you are curious to learn more about teaching with inquiry and teacher moves, our "Classroom" page contains links to our electronic book "Discovering the Art of Teaching and Learning Mathematics Using Inquiry" with pedagogical resources and reflections ranging from "Getting Started" to "Assessment Techniques." 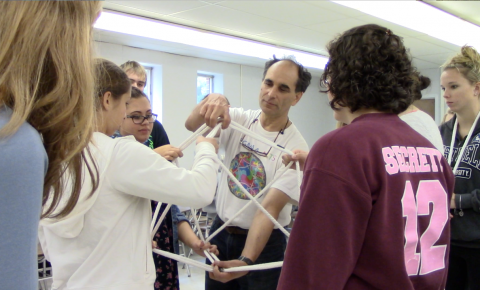