For homework, students were trying to find an equation that connects two whole numbers, their least common multiple and their greatest common factor.

The video begins with one student sharing her findings. I revoice and represent her thinking. In her explanation, the student has made a distinction between the larger and the smaller number. Even though I know that that is unnecessary, I go along with her thinking. Another student asks "Does it matter?" and again I give that question back to the class without evaluating.

Then I'm asking other groups to agree or disagree with the first conjecture. I gave some wait time, then ask for questions and examples. The next student shares his equation, which is a minor (from my point of view) algebraic variation of the first equation. Again I go along with the student's suggestion. Later on, comparing the two versions leads to the students understanding (independently of me) that the distinction between larger and smaller number does not matter.

This video was taken in a mathematics for liberal arts class with 15 honors students. It met two times a week for 75 minutes each. 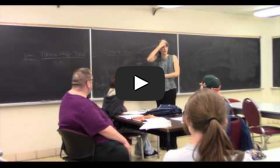 What is Proof? (Ex: Birthday Proof) 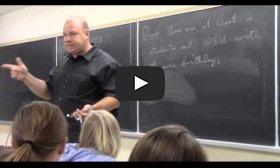