A small group interaction with their professor as part of investigations of the areas of polygons on a geoboard in relation to the number of pins contained within the polygon and those falling along the boundary. Mathematically, these are first steps towards the (re-)discovery and proof of Pick's Theorem. The students wondered which pegs actually lie on the boundary formed by the rubber band. Pedagogically, notice how the teacher works hard to support the students, drawing their attention to particular aspects of the geoboard. It seems he has a certain path in mind, given where the students are. Not all the hints are connecting with the students. In their attempts to describe the different patterns they see, the students realize that they can be grouped depending on the slope of the side of the triangle. 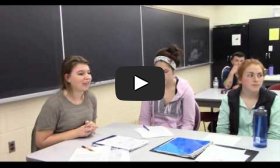 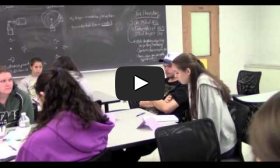