Do your students see that their mistakes are necessary for their learning?
Do they know that everybody (even the most genius mathematicians) makes mistakes?

While you lecture you might not see any student mistakes but one of the eye-opening experiences of inquiry-based learning is the huge amount of mistakes you observe. It was in fact quite depressing for me at first to witness all the things my students didn’t know. But if I don’t know what my students don’t know I can’t teach them so I have learned to use the mistakes as guides for my teaching.

So how do I react when a student makes a mistake? It depends. A computational mistake I usually just point out and let them move on. No reason to get stuck there for a long time because I don’t see what they would learn from staring at a computational mistake besides trying to be more careful next time.

If a conceptual or communication mistakes happen during a whole class discussion I can use talk moves (see blog) to engage students in figuring out what’s happening, as in the above video clip. Often I actually “stage mistakes” by knowing which groups disagree in their answers or reasoning and letting the class decide which group has the better argument. It is crucial that students know and believe that it is ok to change their thinking at any time without losing face (especially with their peers).

While walking around the classroom I listen to my students talking and read some of their written arguments. If I notice that a student made a mistake I try to create a path that will eventually lead to clarification. I might ask “I wonder why…?” or ask the student to talk to someone who has a different argument, but without letting the students know who I believe to be correct. Students are smart! If I only ask “I wonder why…?” if they made a mistake I might as well say “wrong!”. The key is to stay neutral and wonder about everything students say or do.

I want my students to decide themselves if an argument is correct or not and, either independently or as a class, come to a clear answer that they believe in. The reason lies not only in becoming an independent critical thinker of mathematics but also in being a responsible citizen and decision maker outside of class. I do not want them to look at me (or anyone else) as the authority that decides what is right and what is wrong. See video below for an example.

Analyzing mistakes also gives us a chance to think harder about a concept and to eventually get a deeper understanding. In the video clips you can observe how the students deepen their understanding by comparing different answers and strategies. If I had just told them "what's right" they would have never thought as hard and deeply about the issue.

"A person who never made a mistake never tried anything new."

I believe that most teachers would agree that students’ mistakes are necessary and beneficial. They might even say that watching the teacher make a mistake can help the students. But so far I have not met a teacher who felt good about admitting a mistake to the students. I think our profession is still based on “knowing it all” and it is hard to break that belief.

I remember making a big mistake in calculus 3. I admitted to the students that the question I had asked was structured in a way that suggested an incorrect solution and that the reason for this was that in fact I had solved it incorrectly myself. But then I did a mini lecture about the correct answer in such speed and complexity that I am pretty sure no one followed. I think that my own embarrassment about my mistake led to me “stepping out of” instead of “stepping into” learning with my students.

So, what do I do about it? How can I learn to deal with my own mistakes as gracefully as I expect it from my students? I don’t know yet but I am working on it. The other day I practiced by not only admitting a mistake to my audience but by keeping reminding them of my mistake until I accepted it myself.

I also like to have students work on questions that I do not know the answer to yet. While this might feel risky (what if there is no clear answer? Or it is too difficult to get to?) it is very rewarding. It clearly puts me out of my role as the authority and into the role of a learner who makes mistakes, too. The classroom has turned into a learning community.

I do believe that it is very important for the facilitator to model how to be authentic and honest about his or her own knowing and learning. Only then can we expect the same from our students.

Notice that in both video clips students are comfortably talking about "not knowing", showing a desire to learn and the ability to change their thinking. 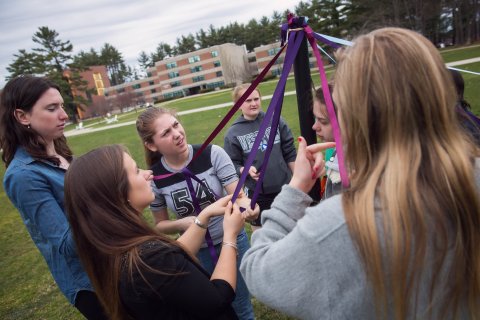