This video was taken in a mathematics for liberal arts class with 15 honors students. It met twice a week for 75 minutes each.

This video was taken in a mathematics for liberal arts class with 15 honors students. It met twice a week for 75 minutes each.

Why Students Write in Math

Discovering the Art of Mathematics: Powers of i

This video clip is from a section of Mathematical Explorations, our Mathematics for Liberal Arts course. In this clip the students are exploring the pattern formed by powers of i and one of them turns to Prof. Hotchkiss as the authority for correct answers. As you watch this clip, listen to her questions and how Prof. Hotchkiss responds to them using inquiry-based questioning techniques.

A small group interaction with their professor as part of investigations of the areas of polygons on a geoboard in relation to the number of pins contained within the polygon and those falling along the boundary. Mathematically, these are first steps towards the (re-)discovery and proof of Pick's Theorem. The students wondered which pegs actually lie on the boundary formed by the rubber band. Pedagogically, notice how the teacher works hard to support the students, drawing their attention to particular aspects of the geoboard.

As part of class participation, students are expected to share their mathematical ideas with other members of their group, to listen carefully to what is being shared, to raise questions if anything is unclear, to agree or disagree (and state reasons), and to keep a record of their findings (and questions) that can be presented to the who class. In this short clip, we witness two students in a discussion about counting the number of ways in which we could relabel a particular 7x7 Latin square. This is about two weeks into the semester. 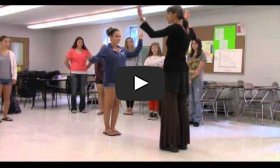