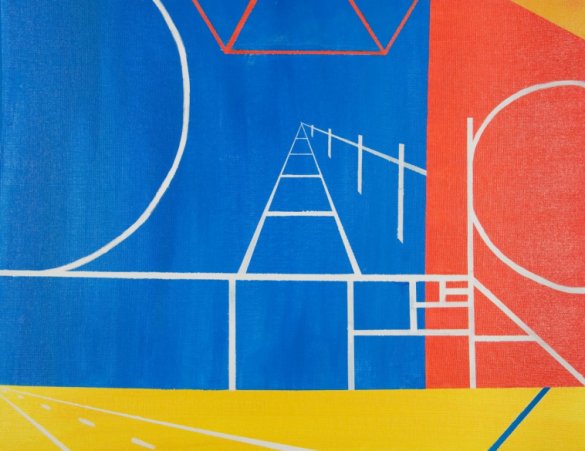 The Artist's Statement for this work is as follows:

When I began to create this painting, I had many things on my mind. In Math Explorations,   Professor Julian Fleron had presented diagrams and pictures to better illustrate each problem. The focus of these packets was on large numbers and the concept of infinity. In observing the illustrations, my mind would wander into places only an Art major would go. I would see certain angles and line segments and think about how I could build off of them and create different things with them. In a stroke of genius while reviewing for the final (and the realization that I wasn't going to do so well in the class), I decided to use the diagrams and illustrations to create my own piece of artwork and hand it in as a 'thank you' gift for putting up with me (and maybe some extra credit).

Being a fan of geometry and clean lines, this sort of thing was right up my alley. I took the seemingly simple illustrations and manipulated them in my favor so they created a, understandable, yet abstract, piece of artwork. Rather than using black lines, I chose white. I used the primary colors, red, blue, and yellow to fill in the background because they are easily identifiable, and I believe that math, if you have the time or mindset to look into it, is fairly simple.

I didn't feel that the piece was anything too spectacular, but I did know that I learned a lot while creating it. Julian's reaction to the painting made me think further into what I had made. He saw things much differently than I had. Although line, shape, and form had intrigued me first in the illustrations, I was now surrounded by so many other aspects of the piece: placement of different figures, their relationship to each other, hidden symbols created by the composition, and something that I introduced on my own – color. All of these things made the painting complex and interesting without me even knowing it.

I came across a quotation by John Louis von Neumann: "If people do not believe that mathematics is simple, it is only because they do not realize how complicated life is." No statement could ever been truer. 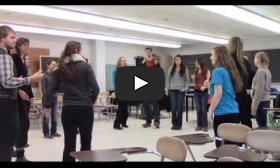 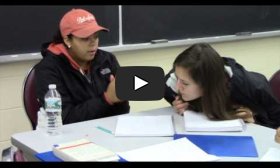