We have long believed that our students enjoyed working on challenging mathematical problems and that after taking our classes they could find mathematics to be beautiful. However, we needed more than anecdotal evidence of this. Data from surveys administered from 2013-2016 provide evidence that our curriculum materials and our pedagogical tools have a significant impact on our students.
Mathematics:
After taking our classes, students know more about what it means to do mathematics, who mathematicians are, and what they might feel. Students find mathematics more interesting and enjoy working on challenging mathematical problems and making discoveries. They find mathematics more beautiful and perceive an increased ability to understand and critique written or spoken mathematical arguments.
General Education:
Students report that their ability to communicate and reason effectively has increased and that they feel more empowered as learners. Their curiosity about the world around them has increased, as has their confidence in taking responsibility for their own learning. 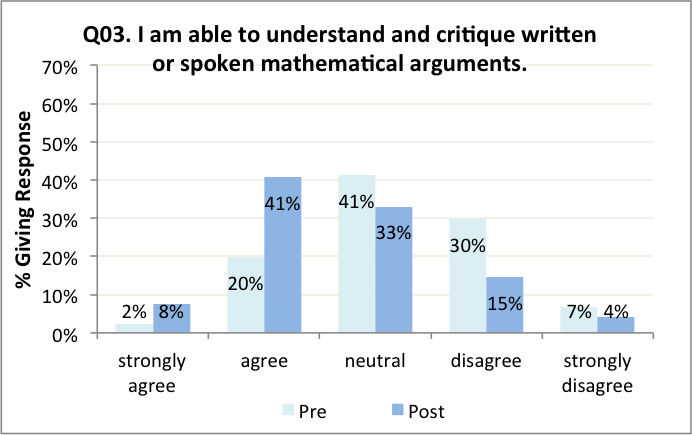 Our project has been working on evaluating the effectiveness of our materials and teaching techniques for many years, you can read the full story of our strategies and attempts in the story of our evaluation. In this blog we describe the results of analyzing matched pre/post survey data from about 450 students, 2013-2016 that measure students' beliefs and attitudes. We are glad to report that students beliefs and attitudes changed in the desired direction for all questions. In addition, many changes are significant and have effect sizes above 0.4 . Specifically, there are 46 questions where it makes sense to compute effect sizes. Out of those, more than 40% show medium or strong effect sizes (larger than 0.4). An additional 40% show weak effect sizes (between 0.2 and 0.4) , and less than 20% show smaller effect sizes (below 0.2).

Our 11 goals for student change were grouped into four larger categories. Here are the key findings for each category with significance levels of p<.0001 and effect sizes in the matched data of at least 0.4:

Understanding the Field of Mathematics (Goals 1-4) 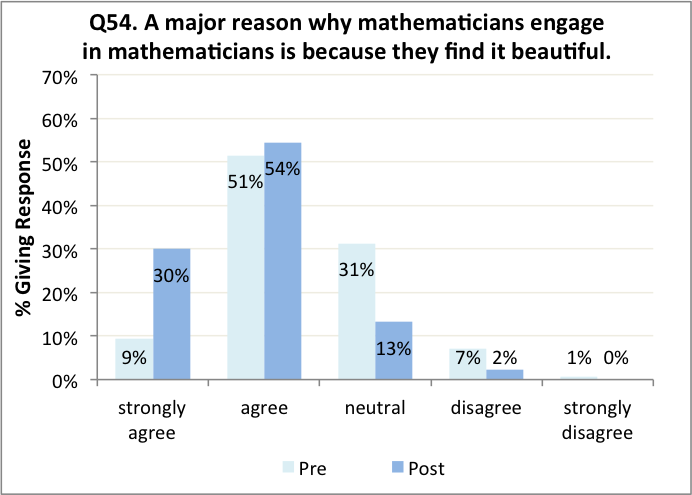 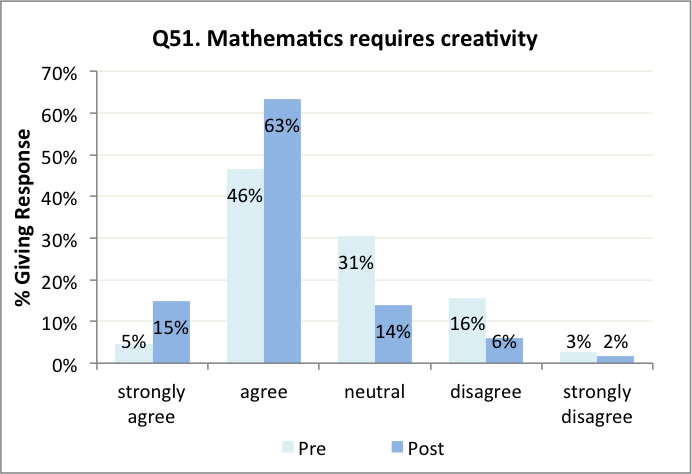 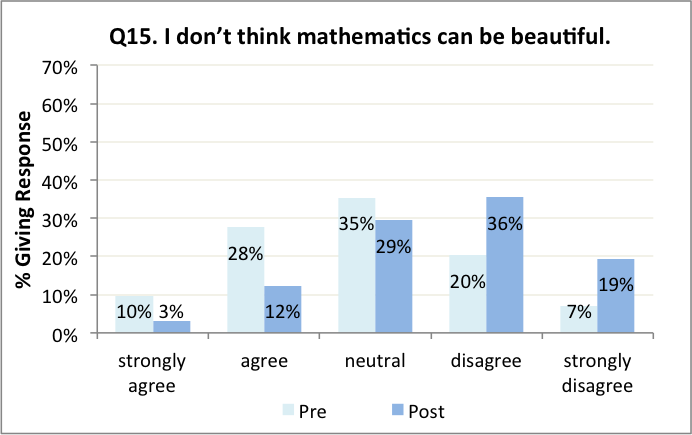 Students self-report an increase in their ability to

In addition, students report an increase in

Detailed Description of the Study

From the fall of 2013 through the spring of 2016, students at Westfield State University taking MLA courses using IBL have been asked to take a pair of surveys, one at the beginning and one at the end of the semester, designed to examine the changes in students’ attitudes to mathematics. In a couple of cases, we were also able to collect surveys from classes outside of WSU, particularly from Drs. Xiao and Schumacher in the fall of 2015 and Dr. Rossa in the fall of 2013.

The surveys were developed collaboratively by the evaluators and the project team. The two surveys were mostly the same, though a set of additional items about the impact of the course were included on the post survey . The study includes about 630 students overall, with about 440 matched responses. Analyses were run for both MATCHED and UNMATCHED data sets. The results for significance levels and effect sizes turned out to be very similar. The matched analysis only includes responses from students who submitted both the pre- and post-survey and whom we were able to successfully identify on both surveys. The tests run were paired-samples t-tests, comparing the pre- and post-survey responses on an individual basis. The unmatched analysis is based on responses from all students who responded to the surveys, regardless of whether they took both surveys or not. For these data, we used independent-samples t-tests, comparing the surveys as separate groups. 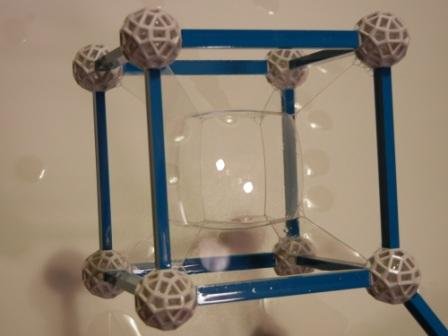