Need for Project, Problems to Be Addressed, and Theoretical Basis for Initiatives

In their 2004 Curriculum Guide, the Committee on the Undergraduate Program in Mathematics (CUPM) specifically highlights general education courses:

''General education [mathematics courses] are especially challenging to teach because they serve students with varying preparation and abilities who often come to the courses with a history of negative experiences with mathematics. Perhaps most critical is the fact that these courses affect life-long future workers and citizens. For all these reasons these courses should be viewed as an important part of the instructional program in the mathematical sciences.'' (CUPM, 2004, p. 27)

MLA is the course where we generally send our Visual Arts, History, Religion, Philosophy, Performing Arts, Communication, Foreign Language, Sociology, Psychology, Music, English, and Literature students for their last formal contact with mathematics. It is essential that this be a high-quality and meaningful experience.

A ''Basic Principle'' cited in Crossroads of Mathematics is, ''Mathematics must be taught as a laboratory discipline. Effective mathematics instruction should involve active student participation.'' (AMAYTC, 1995) Similarly, the Boyer Report states, ''The inquiry-based learning urged in this report requires a profound change in the way undergraduate teaching is structured... Traditional lecturing should not be the dominant mode of instruction... The ideal embodied in this report would turn the prevailing undergraduate culture of receivers into a culture of inquirers, a culture in which faculty, graduate students, and undergraduates share an adventure of discovery.'' (Boyer Report, 1998, p. 16)

Generally, as teachers of Mathematics for Liberal Arts (MLA) we have not done this. In 2005, 79% of MLA courses taught at two-year colleges were taught using the ''standard lecture mode.'' (CBMS, 2007, p. 148) There is no evidence to suggest a different situation in four-year colleges where over 55% of Mathematics for Liberal Arts students are taught by faculty who are neither tenured nor in tenure-track positions. In MLA we remain, a quarter century later, largely in the situation CUPM reported on in 1983:

''Such courses are taken by a large number of students, frequently as their last formal contact with mathematics. Yet in most institutions they are given very low priority; they are frequently taught perfunctorily, without a clear set of objectives, by faculty who lack appropriate interest or credentials.'' (CUPM, 1983, p. 109)

Pedagogy is largely driven by the availability of appropriate curricular materials, particularly in settings like those just described. So what about available texts? Most, especially those with substantial liberal arts connections, follow a typical pedagogical approach making them quite hard to adapt to more inquiry-based and active learning approaches. This is a significant problem as an MLA course ''requires more planning and preparation than almost any other mathematics course if it is to be successful.'' (CUPM, 1983, p. 111) In Crossroads of Mathematics we are told, ''The development of new materials based on the standard set forth in this document is essential to lasting reform.'' (AMAYTC, 1995) Discovering the Art of Mathematics embraces this challenge.

Our pedagogical approach builds on a strong teaching and learning knowledge base descendant from the ancient Socratic approach to teaching. Because ''Mathematics is something that one does'' (E.E. Moise, 1965) and ''The only way to learn mathematics is to do mathematics'' (P. Halmos), restructuring our classrooms proceeded from the central activity we envisioned students engaged in — solving mathematical problems. We agree with Freudenthal who tells us, "Common sense and guided reinvention of mathematics will again pave the road to the answer. [p. 48] Rediscovery, the heart of guided discovery, is beautifully described by Bronowski:

''It is not therefore the monopoly of the man who wrote the poem or who made the discovery'' The poem or the discovery exists in two moments of vision: the moment of appreciation as much as that of creation; for the appreciator must see the movement, wake to the echo which was started in the creation of the work'' We do not merely nod over someone else's work. We re-enact the creative act, and we ourselves make the discovery again. At bottom, there is no unifying likeness there until we too have seized it, we too have made it for ourselves.'' (Science and Human Values, p. 9.)

Guided discovery has had a long history in mathematics [Lakatos, Koestler, Haadamard] Of course, it is not a panacea. But we have found that guided discovery is remarkably effective in MLA. Our approach is practical — with this audience guided discovery helps build student interest, confidence, and ability levels. For a specific illustration of our approach, please see the Vignette which makes up section III below.

''[Engaging students] in rich experiences that encourage independent, nontrivial exploration in mathematics, develop and reinforce tenacity and confidence in their abilities to use mathematics, and inspire them to pursue the study of mathematics and related disciplines.'' (AMATYC, 1995)

CUPM in 1983 was the last major public group which treated MLA as an independent cohort to be studied. This panel noted, ''Among all fundamental academic disciplines, mathematics is perhaps unique in the degree to which it is not understood (or is misunderstood) by students and even faculty from other areas of study.'' It goes on to say that the challenge ''to place the discipline properly in the context of other human intellectual achievement... is enormous.'' (CUPM, 1983, p. 110)

Before the promise of the CUPM recommendations on ''Mathematics Appreciation Courses'' were realized, the emergence of a quantitative literacy movement, an emphasis on applications of mathematics, and profound pedagogical changes made possible by the revolution in computer technology changed the landscape of Mathematics for Liberal Arts. In our view the majority of contemporary MLA courses — e.g. those taught out of the fine COMAP book - might more aptly, without any slight implied, be called Mathematics for Liberal Sciences.

We recognize and respect the importance of quantitative literacy and applications which should be integrated across the general education curriculum. Generally they have not been. But they have come to form a dominant paradigm for MLA. We do not believe this is a healthy balance for this genre.

This development leaves Departments of Mathematics with the entire burden for these critical tasks and it further entrenches the ''two culture'' divide. MLA has begun to lose contact with the natural, powerful bridge that has long kept mathematics as a liberal art and a cornerstone of higher education - its fundamental connections to philosophy, art and aesthetics, history, humanism (White, 1993), culture, and reasoning.

These connections should be a fundamental part of MLA — a course which is often the last formal mathematical experience for many liberal arts and humanities students. As CUPM states,

''College students study the best paintings, the most glorious music, the most influential philosophy, and the greatest literature of all time. Mathematics departments can compete on that elevated playing field by offering and making accessible to all students intriguing and powerful mathematical ideas... Indeed, these courses [general education and introductory mathematics courses] should be developed and offered with the philosophy that the mathematical component of every student's education will contain some of the most profound and useful ideas that the student learns in college.'' [CUPM, 2004, p. 28]

In their Crossroads in Mathematics, AMATYC tells us, ''It is particularly important that liberal arts students understand the impact that mathematics has had on art, history, literature, and many areas of human endeavor.'' (Ch. 3, p. 22) CUPM offers similar guidance, ''Students must come to understand the historical and contemporary role of mathematics, and to place the discipline properly in the context of other human intellectual achievement.'' (CUPM, 1983, p. 110)

Unfortunately, topics such as these, which are central to the liberal arts, ''are ignored by many authors of mathematics for liberal arts texts. Although mathematics is central to modern science and modern western culture, most texts bypass these important aspects of mathematics.'' (White, 1998, p. 675) Morris Kline's warning from over 50 years ago continues to resonate:

''As an incomparably fine human achievement mathematics offers satisfactions and aesthetic values at least equal to those offered by any other branch of our culture. Despite these by no means modest contributions to our life and thought, educated people almost universally reject mathematics as an intellectual interest.'' (Kline, 1953) Discovering the Art of Mathematics meets this challenge directly. Our materials' content is significant, intellectually challenging mathematics which nurtures the natural connections to the liberal arts. It is infused with art, history, culture, humanism, philosophy, and literature throughout — not just as asides, but as fundamental aspects of the mathematical journeys which these materials inspire. Our experience shows that our choice of content and pedagogy helps students 'develop the view that mathematics is a growing discipline, interrelated with human culture, and understand its connections to other disciplines.' "  (AMATYC, Intellectual Development Standard I-4.)

We must be aware that MLA ''courses may play a major role in molding nonscientists' opinions of mathematics and its role in society.'' Rising Above the Gathering Storm tells us, ''All college students should gain an awareness, understanding, and appreciation of the natural and human-constructed worlds'' Therefore, introductory science and mathematics courses must find ways to provide students both with broad education in these fields and with the specific skills they need to continue studying these subjects... Students who pursue non-S&E [science and engineering] majors would then have the background and education to make informed decisions about S&E in their personal lives and professional careers'' [P. 347.]

''Liberal arts education, for a large percentage of the college educated population, is a rigorous, disciplined encounter with the best elements of man's history and culture. The major clientele of the mathematics appreciation courses are liberal arts students, and it is from their ranks that many of society's leaders will emerge.'' (CUPM, 1983, p. 110) 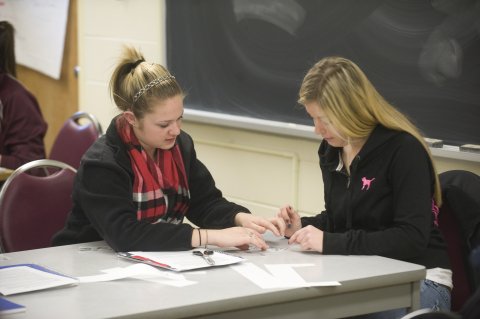