A Look Into Our Classroom

What does a day in our Mathematics for Liberal Arts Classroom look like? It's still five minutes before class starts when I walk into the room.  Each of the nine tables in the classroom has 2 or 3 students seated at it.  Of the two dozen students already in the classroom a few are just sitting idly or chatting while getting organized, but most are already doing mathematics.  They're already "getting their math on" as they often say.  Their notebooks are open, already recording ideas, diagrams, data, guesses, patterns, computations, and rationales.  Soon these things will be transformed into more formal responses to investigative prompts: solutions, reasoning, conjectures, proofs, and mini-essays.

Individually I greet the few students who notice I have arrived, put the quote of the day on the board, and tour the room to see how everybody's work is progressing.  As I do, the room fills up to its capacity of 35, and by the time class is supposed to "start" every student is doing mathematics.  Typically it takes only a few classes at the beginning of the semester for the students to be drawn into being the center of the mathematical experience, and this group is no different.  I've said nothing to the class as a whole, given no direction for them to start working, yet each student/group has picked up their mathematical exploration just where they previously left off.

Our focus this semester has been patterns.  Our most recent foray is into a more strictly mathematical landscape than usual – the prime numbers.  We're looking for strings of primes generated by a cylin-drical "quadratic number sieve" that each student has constructed out of paper expressly for this purpose.

I approach a group who is a bit behind and now all of its members are focused on our materials.  As I expect, they're having trouble deciphering a suite of investigative prompts:

I urge them to be a bit more physically active and write things out.  Almost immediately one student proclaims, "I get it."  She quickly takes on the role of teacher and the group is happily back on their own.

I approach another group who also has communication needs.  "Our group was in the library last night and we were having trouble figuring out how to explain this," one student shares. 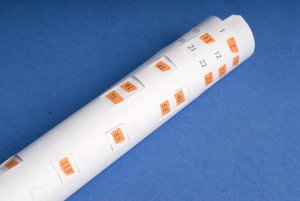 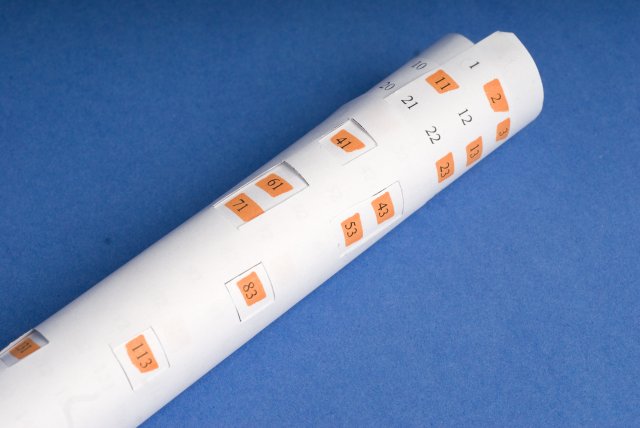 They are working on the investigations given in the box below. Sieves in hand, they show me exactly what they had discovered.  As they articulate their ideas verbally, it becomes clear to them how they can construct clear, coherent, well-supported descriptions and rationales for the results of their investigation – with very little guidance from me.

66)  Show that the first differences of the values of the quadratic $q(n)=n^2+n+c$ will be the same as those of the function $f(n)=n^2+n$ and $s(n)=n^2+n+17$ we investigated above regardless of the value of $c$.
67)  Rotate the sieve so the sieve setting is 17.  What do you notice about the entries in the windows?  I.e. precisely how do these entries relate to results of earlier investigations?
68)  Repeat 67) with a sieve setting of 0.
69)  You should see a critical relationship between entries in the windows for a given sieve setting and the functions $q$ parameterized by the value of $c$.  Describe this relationship precisely.

I continue around the room to a group who I notice is less active than normal and query them about their progress.  "We don't know what to do, how to get conjectures for this goal."  They point to the prompt:

Goal:  Understand the ways in which functions $q(n)=n^2+n+c$ generate primes as outputs depending on the value of the parameter $c$.

I ask them to show me what they've done.  They use their sieves to illustrate that they clearly have several well-developed strategies for looking for strings of primes.  "Why aren't you using even settings?" I ask.  "Because all the results are even.  They're not prime."  "Shouldn't that be a conjecture?  Isn't that part of your understanding of the goal?"  I can see the change wash over them as they begin to talk excitedly about other parts of their strategy that quickly become conjectures that are recorded in their notebooks.

As I pass another group one of the students tells me, "Yesterday in my criminal justice class the professor was talking about burden of proof in civil versus criminal trials.  That's kind of like all that stuff we've done about inductive and deductive reasoning, right?"  The group and I talk about the parallels.  As we talk I realize a contentious debate about something mathematical is brewing in a group across the room.  I'm not close enough to overhear the details, but I know this is fundamental to real learning.  I'll check on them in a bit to see what they have concluded.

Class goes on happily like this for about thirty minutes until I call for a pause so I can make a few announcements, tie some mathematical issues together and talk about how we'll evaluate our current body of work.  Since we've done a "notebook quiz" and an "oral exam" for the last two sections respectively, the students will write up all their results for summative assessment of this section.  I show them the lead article "Prime Number Patterns" (Granville, 2008) in the April American Mathematical Monthly and the cover of the May Notices of the American Mathematical Society (2008).  I'm excited because the former describes tantalizing progress towards solutions of questions we're investigating and the latter shows a two-dimensional Sieve of Eratosthenes that bears striking resemblance to the quadratic number sieve we've built and used for the past few weeks.  The students see that our original course materials have given them a context for and connection to these contemporary, high-profile research papers.  I'm eager to see their essay responses to summary questions that close this section that will be handed in shortly:

Essay 1)  How does it feel to be working on mathematics fundamentally related to two 1$ Million Millennium Prize Problems?
Essay 2)  In your opinion, how do you think mathematicians feel about the status of our understanding of the distribution of the primes?
Essay 3)  You've read about the importance of primes in data encryption and security.  Should this have some impact on mathematicians' efforts to solve the Riemann Hypothesis?
Essay 4)  In this section you worked on mathematics that has captivated mathematicians through the ages.  You have learned about some of the history and contemporary progress.  Compare and contrast mathematicians' progress in this area with the progress of practitioners in major area of focus in their different field of thought.

The first comment when we get back to "getting our math on" gives me every confidence their responses will be good because one student calls out, "Hey Doc."  As I approach she asks, "Is that Wiles guy who solved Fermat's Last Theorem working on this stuff we're doing too?  This is number theory too.  He didn't get $1 Million for his problem, I'd be working on this Riemann Hypothesis if I were him."  The student smiles and her group members nod in agreement.