Movie “The Proof”: How our students view the process of mathematics

How do your students see the process of doing mathematics?

Math for liberal arts students generally come into a mathematics class with a very narrow perception of what it means to do mathematics. To them, mathematics is something that smart people do quickly and effortlessly without help from anybody else. When the mathematics gets messy and difficult these students see this as evidence that they are not good at doing mathematics. In their mathematical experiences, collaboration is discouraged, quick calculations are expected and mistakes are to be avoided (or at least kept to a minimum).

To help our students better understand the process of doing mathematics and how even great mathematicians need to struggle with ideas before solving a problem, we show our students the video, The Proof , a NOVA special about Andrew Wiles proof of Fermat’s Last Theorem. The students’ responses to the video have shown some remarkable depth and recognition of how different the process of doing mathematics really was from what they had experienced.

In the past I have had my classes watch this movie around the midpoint of the semester as a change of pace and an inspiration when the students’ energy is low. However this past semester, my classes watched the video in the third week of the term. I decided to do this as a way of helping my students focus on the process of doing mathematics and creating a proof. Based on my students' work over the semester, I believe this was an effective change. The movie gave them a deeper understanding of what was involved in doing mathematics and how our class would be conducted.

To the right is one example of a writing assignment that Volker and Chrissi assign after the students have watched the movie.

“[M]y views changed when I watched the video Fermat’s Last Theorem and learned about the case for Modular Elliptic Curves. As I watched the video, I was in inspired how Andrew Wiles spent years trying to solve the problem. I could see how much passion he had as a mathematician and his determination to solve the problem. I noticed that when it looked like he solved the problem, he made a small error and had to start from the beginning. I have had similar experiences while taking this course, especially when I was working with the planar tangles, attempting to get 31different planar tangles using 11 [16, actually] tangle pieces.”
DAoM Student, Spring 2016 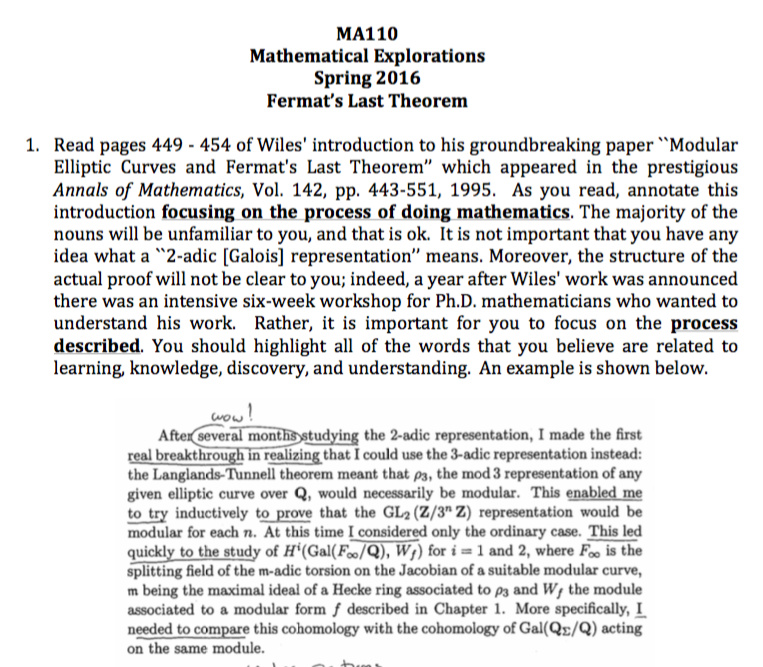 In addition to watching the video, Julian and I give our students a copy of the introduction to Wiles’s paper and have them read it. Based on an assignment from Julian, I asked my students to read the introduction and “highlight all of the words that you believe are related to learning, knowledge, discovery, and understanding.” I then had my students write an essay comparing their previous mathematical experiences with those of Andrew Wiles while working on Fermat’s Last Theorem. You can find the actual assignment to your left.

Assessing written work can be difficult. For this assignment, I used a 15-point rubric borrowed from Julian. This rubric consisted of the following three categories:

The 5-point scale I used for each category was:

Some students, as illustrated by the quotes below, were surprised that the general approach that Wiles took to solving a mathematical problem wasn’t that different from theirs.

“Reading Andrew Wiles introduction to his groundbreaking paper, compares to the way I go about my process in mathematics. In his paper, he uses words such as “to prove”, “mistakes”, “assume”, “I considered”, and many others. This made me realize that as smart as he is, his process isn’t that different to mine.”

“In schools, math’s focal point is solving a problem and only focuses on the correct end result, which can be tedious and extremely boring. There is no room for trial and error, and no room to learn independently. The readings and the movie on [sic] about Fermat’s last theorem illuminate how math should be taught. Some of the phrases used in the article were ‘apply’, ‘realized’, ‘attempted’, and ‘achieved’. These verbs used in the article are describing the process in solving the theorem. Using these words exemplify that math should be exploratory through trial and error, ‘attempting’ or ‘applying’ different methods in hopes of a ‘realization’ or achievement’.”

Creativity and Emotions and... Math?

“I also find it fascinating that he came about his solution through elliptic curves, which has nothing to do with Fermat’s Last Theorem. Had I known that mathematics requires this level of creativity, maybe I would have had more success in my math classes. Unlike Andrew, I let my constant failures in math bring me down. By age sixteen I had people, including teachers, telling me that my talents lay elsewhere; in reading, in writing. People told me I was too creative, so math wasn’t my strong subject. Now that I’ve seen this video and read this article about just one example of how math can be a creative art, I find those comments completely absurd. I was discouraged from trying to succeed in math because I was told I was a creative thinker, not a mathematical thinker.”

“It was intriguing to see math being talked about, for example, with the same kind of fascination as sports are talked about on ESPN.”

Another area that resonated with our students was the role of mistakes. Many of our students have viewed mistakes as something to be avoided rather than something that can help the learning process (see also our blog about making mistakes ). As the quotes below illustrate, our students’ views about mistakes have been influenced by the video.

“I also find it interesting that Andrew gives examples of times in which he was wrong, but his errors actually helped him … I always believed that when you make a mistake in math, you must scrap your work and start all over. This is not true, as I can see from Andrew’s experience with trial and error.
… In my math experience, whenever I did something wrong, my teachers told me to erase it and start over. I was never taught that maybe something I thought of yesterday that at first didn’t lead me to the right answer, could help me find a solution.”

“Watching Wiles talk about his work and his fascination with it revealed a lot of emotion that I typically wouldn’t have associated with mathematics because I am not as invested in math as some people. I also didn’t realize how much collaboration goes into proving theorems or just into math in general. Yes, Wiles kept a lot of his work a secret for a long time, but he had to confide in a few people to make sure he was on the right track, and he had to refer to other people’s work to connect the dots of his proof. Again, the depth of how one mistake or error can cause your entire proof or work to crumble blew me away. I think quite often, when you aren’t as involved with a subject like math as some people, you don’t realize how much time and effort goes into one thing. When Wiles said he spent seven years working on his theorem and then had one mistake in the early stages that sent him on another journey that lasted a few more years to get it right, that’s when I knew that there was much more going into mathematics than I had realized.”

Movie "The Proof" and A Mathematician’s Lament:

In the class prior to watching the video, we discussed the Introduction and Part I (pp. 9-35) of A Mathematician’s Lament and I think that this reading had an impact on the student responses. Several of the student quotes used in this blog talked about creativity and art in relation to the process of doing mathematics and without having discussed A Mathematician’s Lament I do not think that these connections would have been made.

Overall, viewing the video on Wiles proof of Fermat’s Last Theorem has helped our students gain a deeper appreciation of mathematics and the process of doing mathematics.

“I did not realize that creativity was important. I thought there was one way of answering a problem. My previous math teachers only taught us one way to solve a problem and to them, this was the correct and only way. I was taught to memorize that way of solving this problem and quizzed on my ability to remember it in that way. Creativity was not a requirement in my previous math courses.”
DAoM Student, Spring 2016